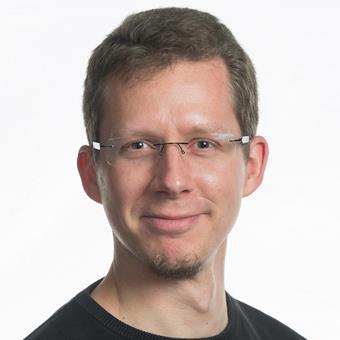 Martin Falk is a senior lecturer in the Scientific Visualization Group at Linköping University. He received his Ph.D. degree (Dr. rer. nat.) from the University of Stuttgart in 2013. His research interests include molecular visualization, large-scale volume rendering, visualizations in the context of cryoEM, pathology, and systems biology as well as visualizing uncertainty, large spatio-temporal data, and glyph-based rendering.

The aim of the project is to develop efficient multi-scale visualizations of 3D stacks of collections of large-scale slide images used in pathology. These slide image, obtained by scanning of such tissue samples, can exceed resolutions of 100,000 by 100,000 pixels at an optical magnification of 40x. A stack of images can thus easily result in more than 100 GiB per tissue sample.

In this project, trajectory ensembles of excitons moving inside organic solar cells are investigated. We use the charge trajectories to extract the backbone of the morphology and to identify, e.g., bottlenecks of the charge transport.

With modern GPU ray casting approaches it is only possible to render several millions of atoms at interactive frame rates unless advanced acceleration methods are employed. But even simplified cell models of whole-cell simulations consist of at least several billion atoms. However, many instances of only a few different proteins occur in the intracellular environment, which is beneficial in order to fit the data into the graphics memory. One model is stored for each protein species and rendered once per instance. The proposed method exploits recent algorithmic advances for particle rendering and the repetitive nature of intracellular proteins to visualize dynamic results from mesoscopic simulations of cellular transport processes at interactive frame rates.

Published at the EG Workshop on Visual Computing for Biology and Medicine (VCBM, 2012).